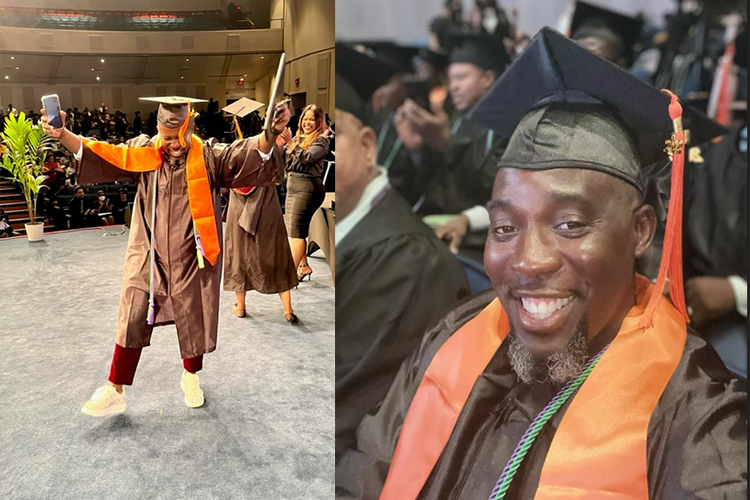 Jonathan Phanor is not ashamed of the time he spent in prison after getting caught up with the wrong crowd, but when he was released, he became determined to live life differently, and he got the opportunity to do that at Florida Career College in Lauderdale Lakes.

Jonathan’s criminal history is unique. He did not directly commit any crimes, but he was involved with people who did and so he was charged with being a part of the conspiracy. At first, he was bitter and heartbroken. Throughout his sentence he said he was humbled. He decided to treat his experience as a chance to start fresh.

“I told myself that in that process I need to make sure that I have to do something to make myself proud again and not just me but my mom and everyone else,” he said. “I had to make them proud again. That’s a big trauma for everyone. I promised myself I would come out and do something different.”

After his release he was eager to start work but without much education he found himself working in labor pools, doing tough work that did not pay much. His mother encouraged him to do more.

He saw a post on social media about Florida Career College’s Heating, Ventilation, and Air Conditioning (HVAC) program at the Lauderdale Lakes campus and decided to give it a try. He had gotten a maintenance job that was stable and learning this skill would add to his resume.

“When I started the program there were some students who had never had the experience of working with their hands or anything like that,” he said. “I said, you know what, I’m not just going to sit here and take in things and not help others. Every student that was struggling, I sat with them. I asked how I could help.”

Jonathan is from Haiti and was able to help other students with a similar background to translate what they were learning. He also asked his employer to donate equipment to the school to give students more opportunities for hands on practice.

“He contributed so much to the classroom,” said Amos Mitchel, Director of Student Finance on the campus. “He helped explain things with the other students, giving them a little tutoring session to help them out. He goes beyond what a student would normally do. Knowing his struggles and the things he’s been through in the past, he wants to create a better future for himself and the people around him. He believes in his ability to do good. He genuinely cares for people and he’s the type of person that will do something and ask for nothing in return.”

Helping other students didn’t take away all his own struggles. There were times when he wanted to quit but he kept his mother in mind. She suffered several strokes while he was in the program, but always encouraged him to keep going.

“She was the person I go to when I want to give up,” Jonathan said. “I would look at it and think if I give up, God forbid something happens and she doesn’t see me graduate, that would be hard for me.”

When graduation day came, his mother’s health was very poor. After her strokes she was not able to see and coming to graduation in person was not a possibility. Jonathan made do by keeping her on the phone with him through the entire ceremony.

“I just had her on the phone, and she heard the excitement and everything. She was happy,” he said “For me, it was something that I couldn’t even fathom. I couldn’t believe I was there. It was something new for me that I will never ever lose. I’m just happy that it happened to me.”

“I want people to know there is nothing in life you cannot do, no matter what age or what part of life you are in,” he said. “As long as you stay focused and don’t give up on your goals, you’ll make it.”